Our Beardstown, Ill., pork facility launched a $4.4 million solar panel project, which is expected to offset between 7-8 percent of the plant’s energy use and generate more than $220,000 in savings annually.

In March 2020, JBS USA Beardstown concluded construction of its large-scale solar project, developed in partnership with One Sun. Situated on eight acres of repurposed farmland, the 7,200 360W monocrystalline solar panels will generate 4,000,000 kWh annually. Excess energy production will be sent into the regional power pool for which the facility is projected to receive $2.3 million in Renewable Energy Certificates (RECs) revenue over the next five years. Additional anticipated savings include $650,000 in rebates and $1.3 million in tax incentives during the project’s first year of operation.

The $4.4 million project, developed through Illinois’ first IPA REC Lottery, was one of 740 community solar projects selected via algorithm to receive RECs as part of the state’s Long Term Renewable Resource Procurement Plan. Furthermore, as the project was financed through Illinois’ first Property Assessed Clean Energy (PACE) program, it required no capital investment from the Beardstown facility. 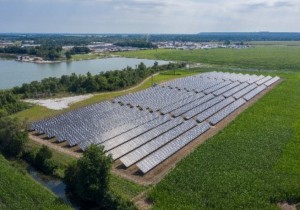